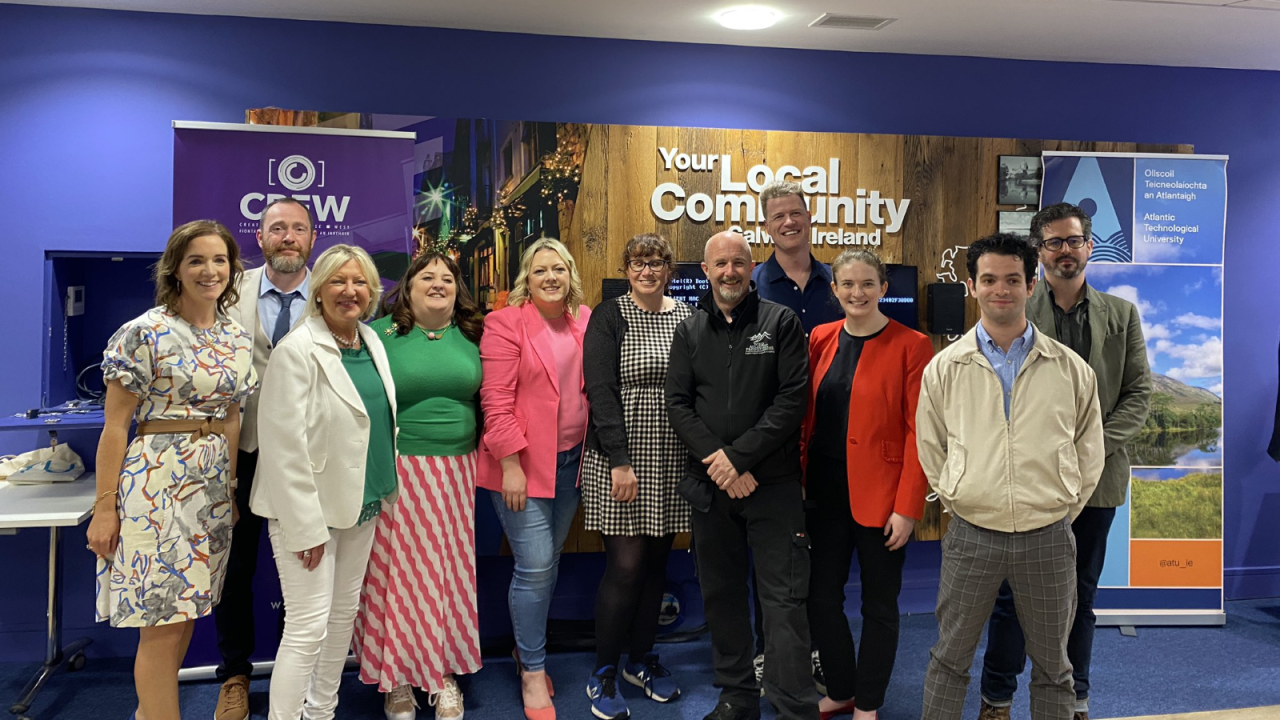 The CREW initiative reached a new milestone on the 18th of May with the inaugural Creative Entrepreneurship and Enterprise development (CEED) Programme showcase. The incubation programme, the first of its kind for the region, aims to help creative digital professionals validate new ventures for commercial potential.

This year’s cohort featured participants from diverse backgrounds such as TV and film, visual effects production, publishing, design and fine art. Counties on the Western seaboard from Donegal to Kerry represented the majority of participants with 25% of the cohort are based in Gaeltacht regions. Access to digital hubs is a core part of the CEED programme as it facilitates networking and collaboration among the cohort and the wider community.

Over the course of 12 weeks, the CEED programme cohort learned about creative ideation, market research, customer discovery and venture building. The showcase gave them a platform to show what they learned in the programme, network with the wider ecosystem and refine their storytelling to communicate the value of their respective ventures. The event was delivered in two parts – the networking and pitch presentations.

The event was filled to capacity with representatives from higher education institutes, startups, Galway and industry present to view the pitches from the entrepreneurs and to network.

The Judges prize on the day was given to Aisling Kearney Burke with Mea Manu – a platform that provides corporations with wellness programmes and solutions cantered on creative activities. Aisling, based in Galway, is the CEO and founder of Paintclub and has a background in art and design.

Jennifer Davidson won the storytelling prize with her pitch for Scéal Creative Toolkit – a digital platform for Irish film and tv writers, giving them access to expert training and advice to help them upskill and develop their career paths. Jennifer is based in Mayo and is a screenwriter and the Chair of the Writers’ Guild of Ireland.

The sustainable impact prize was won by Peter Staunton for TVLive.ie – an innovative live streaming service that offers both ticketing and production in one place at no charge to the performing artist. Peter is a musician and producer based in Kerry.

The judges on the day were Caroline McDonagh from LEO Galway, local artist Finbar McHugh, and Head of Business Banking at Bank of Ireland, Galway, Brian Carey.

CREW is a collaborative, not for profit company established by ATU (formally) GMIT, The Western Development Commission and Ardán (Galway Film Centre) with the mission to develop and support the creative industries sectors along the Atlantic Economic Corridor

Plans are also under way for the development of a Centre of Excellence providing enterprise and co-working space, on the GMIT Centre for Creative Arts & Media, Cluain Mhuire campus, Galway

We use cookies on our website to give you the most relevant experience by remembering your preferences and repeat visits. By clicking “Accept All”, you consent to the use of ALL the cookies. However, you may visit "Cookie Settings" to provide a controlled consent.
Cookie SettingsAccept All
Manage consent

This website uses cookies to improve your experience while you navigate through the website. Out of these, the cookies that are categorized as necessary are stored on your browser as they are essential for the working of basic functionalities of the website. We also use third-party cookies that help us analyze and understand how you use this website. These cookies will be stored in your browser only with your consent. You also have the option to opt-out of these cookies. But opting out of some of these cookies may affect your browsing experience.
Necessary Always Enabled
Necessary cookies are absolutely essential for the website to function properly. These cookies ensure basic functionalities and security features of the website, anonymously.
Functional
Functional cookies help to perform certain functionalities like sharing the content of the website on social media platforms, collect feedbacks, and other third-party features.
Performance
Performance cookies are used to understand and analyze the key performance indexes of the website which helps in delivering a better user experience for the visitors.
Analytics
Analytical cookies are used to understand how visitors interact with the website. These cookies help provide information on metrics the number of visitors, bounce rate, traffic source, etc.
Advertisement
Advertisement cookies are used to provide visitors with relevant ads and marketing campaigns. These cookies track visitors across websites and collect information to provide customized ads.
Others
Other uncategorized cookies are those that are being analyzed and have not been classified into a category as yet.
SAVE & ACCEPT